Geci started the day with an overwhelming chip lead as the only player to have more than 200M in chips, a full 23 big blind advantage over the rest of the field. However, even with a healthy lead headed into the final table, his path to victory would not be an easy one with some exceptional poker talent including Daniel Dvoress, Dzmitry Urbanovich, Christian Rudolph, and fellow UK grinder Jonathan Proudfoot all earning a seat for Day 3.

Once play got underway, it didn’t take long for the fireworks to start. Roughly thirty minutes into the day, Geci went to work and put in a raise under the gun with his

. Geci promptly four-bet enough to put the short-stacked Proudfoot all-in. Proudfoot made the call and board ran out

, shipping the pot to Geci and taking out Proudfoot in ninth place for $72,260.

giving Geci top set and Brinkmann a flush, straight and straight-flush draw. The turn was the

. But the river was the

adding to Geci’s growing stack and sending Brinkmann out in eighth for $91,542.

. On the button, Christian Rudolph made the call holding the

hit the turn he picked up a gutshot straight draw as well. However, the river was the

giving shipping the pot to Rudolph’s ace-high kicker and sending Mullen home in seventh for $115,425.

Not long after busting Mullen, it was Rudolph’s turn to put his tournament on the line. Rudolph raised from under the gun with the

and when it folded back to Geci in the big blind, he three-bet enough to cover Rudolph with

. Rudolph committed the rest of his chips and the board rank out

giving Geci another full house. For the second time in an all-in situation, Geci’s pocket tens won the flip and that sent Rudolph to the rail in sixth place for $146,300.

After an early position raise from Daniel Dvoress holding

When folded back to, Dvoress called with his dominating pair and Gelonezi was left looking for help. The

flop gave Dvoress a set, but brought some additional straight outs for Gelonezi. The turn was the

and the river was the

The momentum for partypoker ambassador Dzmitry Urbanovich had been trending upwards and at one point, he climbed into second in chips. But shortly after the third break, after taking a bit of a hit to his stack, that momentum came to a halt when he and Dvoress clashed in a cooler. Dvoress put in a raise from under the gun with

and Urbanovich, with slightly fewer chips, three-bet shipped his

, giving Dvoress top sent and when the

hit the turn, Urbanovich was drawing dead to the

river. The partypoker pro fell in fourth place and added $276,128 to his over $3.2 million in career online earnings.

At three-handed, Dvoress assumed the chip lead. However the three stacks were bunched together and when Dvoress lost a flip to Geci, he found himself short. Eventually, he put in a raise holding

and Francisco Correia called him in the big blind with the

and the action checked through. The turn was the

giving both players a straight. Correia led out and Dvoress called. The river was the

, lifting Correia’s hand to a queen-high straight and he shoved, having Dvoress covered. Dvoress eventually made the call and ended up at the third-place finisher, earning $422,422.

As heads-up play started, Correia and Geci tried to negotiate a heads-up deal. They couldn’t agree so they played on. As their stacks grew closer together, they tried again and finally agreed. The deal awarded Correia $731,960 and Geci locked up $724,838 with $50,000 be left to the winner.

After the deal, Geci went on a run and took back the chip lead he started the day with. This time, he didn’t let it go. On the final hand, Geci limped the button holding

and Correia checked his option with the

and both players checked. The

fell on the turn and after Correia checked, Geci put out a bet which Correia called. The river came the

and Correia checked again. With this top two pair, Geci shoved and after taking his time, Correia made the call. Correia finished as the runner-up and took home the $731,960 he negotiated in the deal.

Endrit Geci collected the additional $50,000 set aside for the winner and became the 2021 partypoker MILLIONS Online champion, earning a total of $774,838. 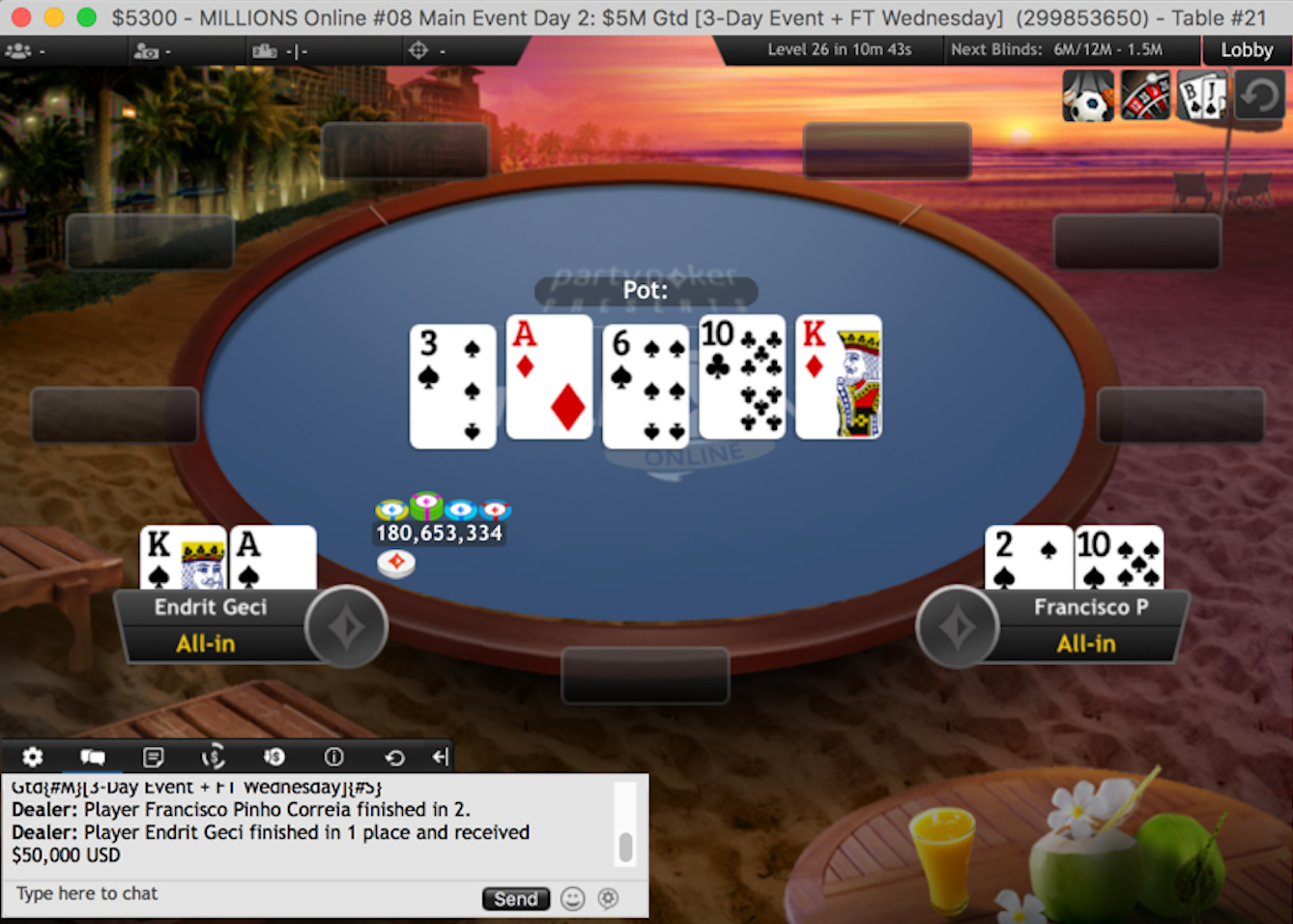