The World Series of Poker’s debut of the popular GGPoker Flip and Go format took place this weekend and, love it or hate it, the tournament and its opening flights brought some old-school action back to the players in the Rio.

For the uninitiated, Event #20 ($1,000 FLIP & GO) worked like this: eight players at a table are each dealt three hole cards. Next, the dealer puts out the flop. After seeing the flop, every player chooses one card to throw away, leaving themselves with the two cards they think will have the best chance of surviving to the end. Once discarded, most players turned their hands face up as the dealer delivered the turn and the river. The best hand of the eight wins and that player advances into the money. If there’s a chopped pot, those players run it back until there is a single winner. From there, the tournament is played like a traditional event.

Some call the quick-paced prelims the ultimate rec-friendly tournament, removing all of the time-intensive early play hurdles while delivering the thrill of late-stage play and the promise of a payday within minutes. Others, however, call it “flipping for a bracelet.” Whichever side of the fence you sit on, it’s hard to deny that the Flip & Go brought a buzz to the Pavilion.

At first glance, many thought that players had just a couple of shots at winning their flips. The two flights of the tournament on the official starting day, Sunday, October 10. But in reality, the Flip and Go played more like a Phase Tournament – whenever eight players were interested in flipping, they could get together in the single table satellite area of the Pavilion and hold their own opening stage.

In fact, these on-demand flights were offered very early on in the series – as early as October 1. However, the word didn’t really get around until GGPoker ambassador Daniel Negreanu rallied the troops and decided to spend some time taking shots in them.

Going to play some Flip N’ Gos tomorrow at 3pm all are welcome to join the fun in the satellite area.

Win the flip and you are in the money Oct 10th.

Like many other online Phase tournaments, where players are able to fire in as many opening flights as they’d like in order to bag chips for a Day 2, bankroll is a big consideration here. The consistent firing of on-demand tables had the look of the old school bracelet rebuys of years ago, back when Negreanu – with a virtually unlimited bankroll – would fire, take thin (or even -EV spots), and just to go broke so he could snap rebuy in order to get more chips on the table to win back later. It’s not apples-to-apples here. Once you advance you start equal to everyone else, but there is a bankroll threshold in this particular Flip and Go of just how many times will it take before you win that 8-handed all-in. And, for a recreational player, how many flips can you lose before they can no longer take any more shots.

Once Negreanu sat down, the action heated up as captured by WSOP Social Media guru Kevin Mathers.

It was clear that once people got going, they were having a good time. Enough to want to take more shots. The fast-paced action is packed with adrenaline, knowing that if you win this one flip you are already in the money. But trying to get to the money phase turned out to be costly for a number of high-profile pros who found themselves on the negative side of variance and ended up being too long to be wrong.

9th time is the charge for @RealKidPoker as he advances to Sunday’s 7pm restart in @WSOP Event 20: $1,000 NL Flip & Go presented by @GGPoker pic.twitter.com/2JIQLouDWc

$1k flip & Go @GGPoker bracelet event. @RealKidPoker , @IrEgption and I trying to make it through! 🤞🏻 pic.twitter.com/HbHl4uPkBG 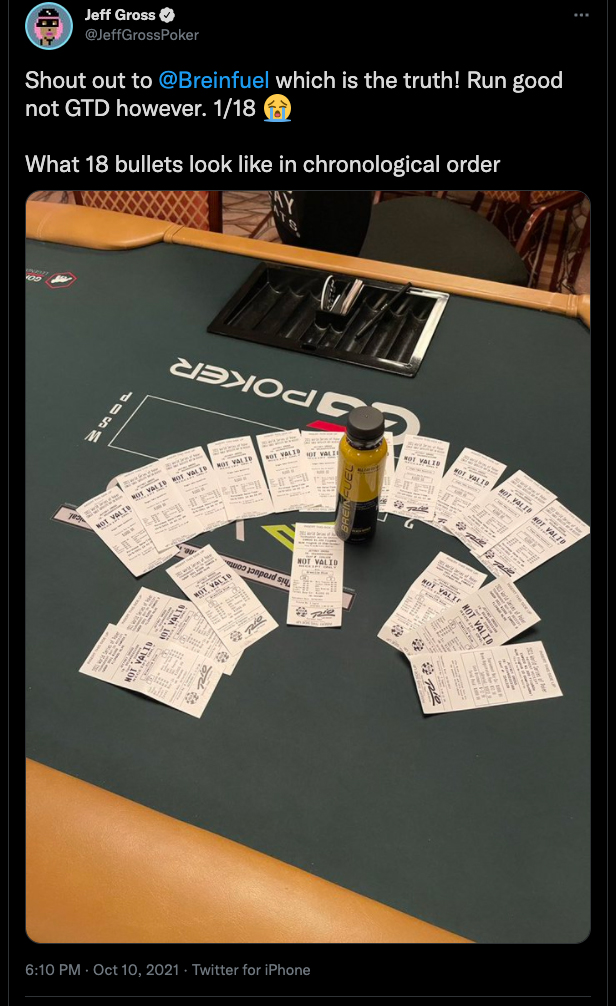 The criticism of bringing Flip & Go’s to the WSOP was not unexpected and, for traditionalists, understandable. For some, removing the skill edge and nuances of navigating the early stages of large-field tournaments and leaving it up to luck may feel like a betrayal of the game. However, to say that strategy is out the window in the first phase of a Flip & Go wouldn’t be accurate.

When all was said and done on Sunday, 155 players advanced. With a total of 1232 entries at $1,000 a pop, the prize pool swelled to just over $1.1 million. An impossible number without having run the on-demand single tables for days in advance. Estimates have it that in the two scheduled Sunday flights roughly 50 people advanced as compared to over 100 who advanced by grinding the single tables between Thursday through Sunday.

The min-cash was $2,000, double your money. But for some, that’s barely going to make a dent in the damage it took to get there. For a player like David Williams, who, as noted above fired 19 times, nothing less than the final table in the Flip & Go was going to get him even. Unfortunately for him, while it goes down on record as a cash, a 117th place finish for $2,155, Williams will have to rely on his second-place finish in the $1,500 Seven Card Stud for $50,842 to get him out of the flippin’ hole.

At the end of Day 1, just 23 players remained in the Flip & Go Event. The remaining runners will play down to a winner on Monday, October 11 with a first-place prize of more than $180,000.

What’s so good about multi-tabling in online poker?

How to Play Queen-Ten Suited in Cash Games

Did Doug Polk Screw Up? Elite Poker Pro Nick Petrangelo Breaks It Down