“…And to me, this is white magic. Apex predator sh*t. King Kong sh*t. What do you have to say?”

When Phil Hellmuth ranted about that “King Kong sh*t” during his High Stakes Duel match against Daniel Negreanu everyone who was watching instinctively knew what he meant. It was about pumping himself up, pounding his chest, and proving to himself that he can do what needs to be done in order to win, no matter the situation.

Sweden’s Mathias Joelsson understands exactly what Hellmuth is talking about and, as the winner of the first-ever GGPoker Spring Festival Main Event, he’s got $1.25 million to prove it.

Besides, it’s right there in his GGPoker screen name: ‘KingKongJoel’.

“I was running pretty hot, won many of my flips, and played good in general,” Joelsson said, reflecting on his seven-figure score. “I was lucky in a few spots early on, like you have to be pretty much in a tournament with a huge player pool.”

The player pool for the GGSF $1,500 Main Event was indeed huge, 6,803 total entries to be exact. But he navigated the potential pitfalls of the massive field and accumulated a big stack heading into the final table which, according to him, actually when pretty smoothly.

“I had such a big advantage stack-wise so I could apply a lot of pressure, so there weren’t many spots where I was risking my tournament,” he said.

Once Joelsson found himself heads-up for the title against Zhuang Ruan, he agreed to chop the bulk of the prize pool and locked up the $1.25 million score, the largest of his career.

“I started playing when I was 18, back then I was mostly playing for fun, gambling some on the side,” Joelsson said. “Then, in the past few years, I’ve got into coaching, I play PLO tournaments and Hold’em cash games.”

The time Joelsson has spent in the lab has clearly been paying off this year. In addition to his huge GGSF score, he nearly took down the recent $1,050 World Series of Poker Circuit High Roller where he finished runner-up to David Yan added another $116,358 score to his growing resume. 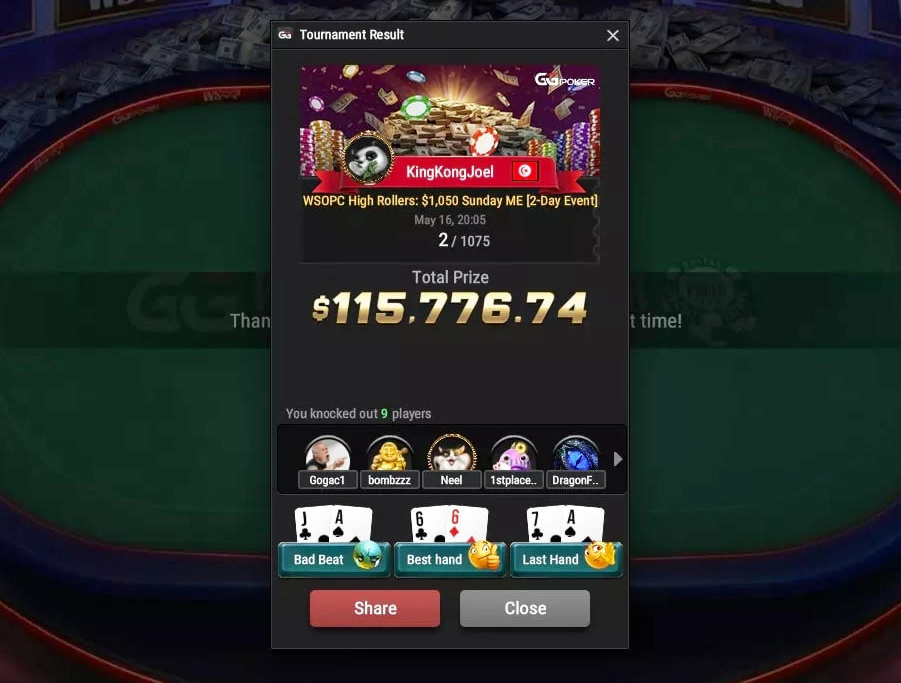 “I have a coach from Peru that I’ve been studying with a lot. We’ve been going through my past tournaments and I’ve been working with solvers, something I started with a couple of years ago.”

While the name ‘KingKongJoel’ may not yet be well known on the high roller scene, Joelsson is no stranger to gambling for large sums of money on the internet. Joelsson and his brothers run an online casino affiliate business which he promotes by taking to Twitch to stream himself taking shots at online casino and table games. Even though his poker game is progressing, balancing his work and family life can sometimes come between him and grinding online.

“I only play [online poker] one weekday and Sunday’s usually. I’ve been streaming poker on Twitch (on Giftmyra), but since I have my son it’s hard to sit and stream every day of the week – especially late at night,” he said. “I travel a lot and also stream three to four times a week on our gambling channel, CasinoDaddy, so there’s even less room to play poker every day.”

“I’ve been thinking for a long time of getting back into poker streaming but I don’t know exactly when that will happen.”

In the meantime, Joelsson will be using his score to jump and play some of the bigger events on GGPoker as well as indulge in a large purchase or two.

“I might buy a house. That’s been the idea,” he added.

What to do with the money and when to play online aren’t the only plans that Joelsson is looking forward to making in the future. After taking down his Spring Festival title, he has an itch to win some new hardware in the live arena as well.

“I’ve been speaking with my friends about going to the live events in Vegas, the World Series of Poker and such,” he said. “But we’ll see, not a big fan of flying and nothing’s set in stone yet.”