Phil Hellmuth is the reigning champion of PokerGO’s High Stakes Duel once again after defeating Tom Dwan in the Round 3 high-stakes heads-up rematch for $400,000.

The three-hour match featured mostly measured play with only a few wild swings and no major eye-popping moves. For the most part, Hellmuth and Dwan appeared content to let the game come to them with Hellmuth getting the better of Dwan in a number of critical big spots. The table talk was also fairly muted as well. There were no real “Poker Brat” moments and Dwan, who often appeared unphased throughout the first hours of the match, only showed signs of slight frustration toward the end.

Once Hellmuth found a way to seize the momentum he didn’t let up. The 16-time WSOP champ was making hands when necessary and keeping Dwan off balance with some interesting pre-flop raises that kept the chips coming his way.

As expected, in the early going the stacks stayed relatively close with Dwan holding a small edge throughout the first hour. One notable hand that took place early, with the blinds at 300/600 (600 ante), Hellmuth limped the button holding

and Dwan checked his option with his

. The flop came out

and Dwan checked it over to Hellmuth who put out a bet of 600. Dwan check-raised his flush draw to 2,500 which Hellmuth called. The turn was the

, adding a straight draw to Dwan’s outs. It was the

that completed the board and Dwan hit his flush. Dwan led for 8,700 and Hellmuth went into a brief tank before releasing his hand.

“F*** me,” Hellmuth said as he got up to take a lap and walk it off. By the end of the hour, however, the stacks were even again.

and Hellmuth, who held a slight lead, made the call with the

giving Hellmuth top pair and Dwan a flush draw. Hellmuth checked to Dwan who fired another 3,600 and was snap-called by Hellmuth. The turn brought the

, giving Hellmuth a king-high flush draw as well and after he checked, Dwan fired for 9,600 more. Hellmuth then check-raised to 19,200 and after a moment of consideration, Dwan called. “I’m very likely to check the river here…but who knows,” Hellmuth said right before the

completed the board. Hellmuth made good one that statement and checked, with only king-high Dwan seemed to weigh all his options but ended up conceding the 50,800 chip pot with a check back.

As the match stretched into the third hour, Hellmuth won a string of hands and jumped out to a modest lead. Then Hellmuth found a way to widen the gap. With the blinds at 400/800 (800 ante) Hellmuth limped the button holding

. Hellmuth responded with a chunky three-bet to 21,000 and after a moment, Dwan made the call. The

flop saw Hellmuth hit middle pair. But when Dwan checked to him, he opted to check back. The turn brought the

, improving Hellmuth to trip. Dwan checked again and this time Hellmuth bet out 17,000. Dwan made the call and the pair saw the

complete the board. Dwan checked yet again and Hellmuth followed through with another bet, this time for 37,000. Dwan went into the tank, used some of his time bank, and eventually made the call. Hellmuth dragged the 150,000 chip pot and got out a three-to-one lead.

Wow! @Phil_Hellmuth extends his chip lead and keeps the pressure on @TomDwan!

Hellmuth started the fourth hour with another big hand. At 500/1000 (1000 ante) Dwan called on the button holding

and Hellmuth, who had been putting in big raises with smaller holdings all match long, made it 10,000 to go with the

. Dwan made the call and the flop came

hit the turn, giving Hellmuth the straight flush. Hellmuth bet 6,000 and, with the king of clubs in his hand, Dwan made the call. The river was the

, putting a straight on the board. Hellmuth checked it over, clearly hoping for a bet from Dwan who ultimately checked back and was shown another huge hand by Hellmuth who climbed to holding 80% of the chips in play.

The end came soon after. Hellmuth called on the button with the

and Dwan looked down at

in the big blind and put in a raise to 7,000. Hellmuth took a look at Dwan’s stack and went for the final blow, shipping it all-in. Dwan looked to the side and made his final stand with a call. With nothing left to do but watch, the pair saw a board of

award the hand and match to Hellmuth.

The friends got up and shook hands with Hellmuth quickly declaring “I know you’re rematching…this time for $800K” to which Dwan replied, “Yea, it’ll be a big one.” 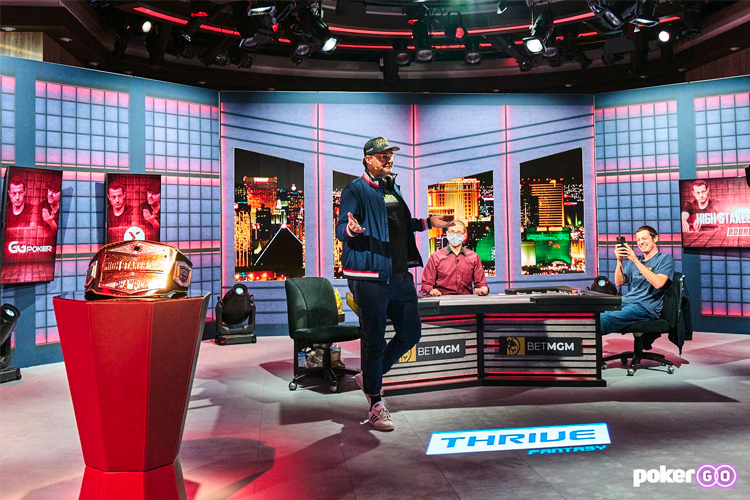 With Hellmuth back as the High Stakes Duel champion, he still needs to win two more matches in a row in order to cash out. To get there, he would need to win the $400K buy-in and an $800K match for a potential $1.6 million payday.

Dwan now has the option to re-challenge Hellmuth in Round 4 would only need to win two in a row in order to walk away.