However, who would win the largest payday of the series wasn’t the only storyline taking place inside the PokerGO Studio on Tuesday. Final table short stack, Sam Soverel, started the day as the only player with the chance to catch three-time 2021 USPO winner David Peters for the overall series lead. Although Soverel hung around, giving Peters a sweat, in the end, Soverel busted and Peters locked up back-to-back USPO overall titles and taking home the trophy and an additional $50,000 as the leaderboard winner.

It took some time before the first player hit the rail but after an hour of play, the blinds were up to 30,000/60,000 (60,000 bb ante) when a clash of two of the larger stacks took place. From middle position, businessman Bill Klein opened to 140,000 holding

. When the action folded to Winter in the big blind, he defended with the dominated

. That all changed when the flop came

, giving Winter a flopped full house which he checked over to Klein. Klein checked it back and the pair saw a

hit the turn. Winter led out for 240,000 and after a few seconds, Klein raised to 620,000. Winter took a little time and three-bet enough to put Klein all-in and Klein quickly made the call and saw the bad news. The turn river was the

Soverel started the day as the short stack and found a way to navigate the early going, picking up chips along the way. However, with the blinds still at 30,000/60,000 (60,000 ante) the Event #2 champ was sitting on just five big blinds when he raised from under the gun with

to 300,000, leaving himself a single 25k chip behind. From the big blind Stephen Chidwick, holding

, giving Chidwick top pair and control of the hand. The turn was the

, no help to Soverel who was down to just three outs. The

was not one of them and Soverel finished in fifth place for $168,000 and David Peters was officially declared the U.S. Poker Open 2021 Champion.

flop brought Little top pair and he checked it over to Chidwick who made an overbet of 500,000. After taking a few moments, Little announced he was all-in and Chidwick snap-called him with the dominating hand. The turn came the

, adding some straight outs or Little. The river, however, was the

. Winter took a breath, announced all-in and Koon shipped his stack as well, putting his tournament at risk. The flop came

, giving Winter top set and leaving Koon with few ways to win the hand. The turn came the

, opening the possibility of a runner-runner straight for Koon. But the river was the

and Koon, shipped his chips to Winter and went to collect his $336,000 third-place prize.

After eliminating Koon, Winter grabbed the chip lead over Chidwick for the start of heads-up play. Unlike some of the other events that took place during the USPO, where heads-up play proved to be a drawn-out battle, these two high-roller stars got it all in the middle in under 20 minutes.

flop brought Winter second pair and he checked it over to Chidwick who continued for 375,000. Winter decided to call and the

hit the turn, bringing Chidwick top pair. Winter checked it over again and Chidwick made it 900,000 to go. Again, Winter made the call. The river was the

, giving Winter two pair, which he checked for the third time. Chidwick took 15 seconds and shoved all-in to which Winter wasted no time in making the call, ending the tournament. Chidwick, the 2018 USPO overall champion, finished as the runner-up and collected $504,000 while Winter earned his second career USPO event title and $756,000 for the win.

And at the conclusion of Event #12, the 2021 U.S. Poker Open has also ended with David Peters taking down the overall championship and earning an additional $50,000 (and a 56-pound Golden Eagle trophy). Peters cashed in four of the 12 events, winning three of them and earning a total of $832,950 giving him a total of 646 championship points. With his victory in the $50K, Winter finished second in points with 484, and Ali Imsirovic, with five cashes, finished in third with 483 points. 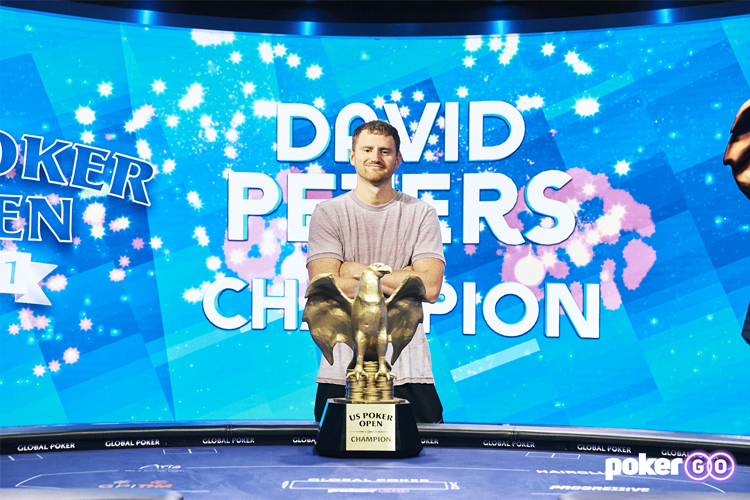 How Do Poker Tournaments Work?